It was with great pleasure that I accepted the position of President of FOGP at our Annual Meeting this past October. I would like to begin my first official communication as your President by thanking both our outgoing President John Lundeen and our retiring Treasurer John Sheppard for their many years of exemplary service to the organization. I also want to extend my sincere thanks to Dave and Carol Criklear for hosting the Annual Meeting. From their lovely home, one could view Gorham’s Pond in all its majesty and beauty, giving us all a poignant reminder of what we have to lose if steps are not taken to preserve it.

The past two years have seen some great accomplishments. Two STEAP grants were obtained for the restoration of the Upper Pond, a project plan was developed and a bidding process was conducted. When the winning bid was some $50,000 above the available funds, FOGP was able to cover the shortfall, thanks to the generosity of its members. The Upper Pond project began in the fall of 2015 and was completed this past October. In a ribbon-cutting ceremony attend- ed by First Selectman Jayme Stevenson, State Rep Terrie Wood and State Senator Carlo Leone, FOGP members celebrated the completion of the first stage of the watershed restoration. Now when you drive along Goodwives River Road, you can see the Upper Pond in all its original glory. Already residents have noted an increase in bird life, including a pair of bald eagles that called the Pond home this past summer. 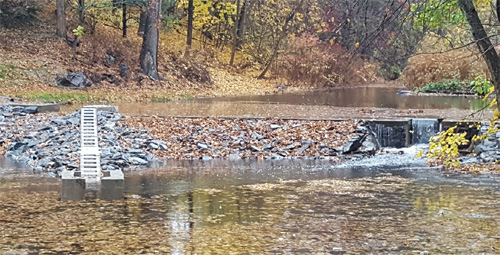 To restore the entire Gorham Pond watershed is an enormous task. It has been estimated that 50,000 tons of sediment have washed into this watershed from the use of sand on I-95 for the past 40 years. DOT no lon- ger uses sand for snow mitigation, so the time is right for the project. But dredging and restoring the entire watershed at this time of limited governmental resourc- es will require us to proceed in a step-by-step fashion. Now that the Upper Pond work has been completed, we are focusing our efforts on the area immediately downstream – the section just below the Goodwives River Bridge. As we obtain additional funding, we will continue to move further downstream, eventually dredging Gorham’s Pond itself.

We will not be able to pursue this goal without the con-tinued support of our members. I thank you for your interest and participation and I look forward to working with you going forward on this vitally important environ-mental project.

Revenues exceeded operating expenses by approximately $8,750 for the Friends of Gorham’s Pond during 2016. Receipts from contributions totaled $23,007 and ongoing operating expenses were $14,256.55. In early 2016, we made a $25,000 donation to the Town of Darien to enable the Town to complete the initial phase of the Gorham’s Pond watershed project, involving the cleanup and restoration
of the Upper Pond, the repair of its dam and the installation of a fish ladder. That donation brought the total contribution of FOGP toward the Upper Pond phase of the project, completed in October, to more than $50,000. An additional $9,800 was spent on an engineering study for phase two of the restoration project, which will be the focus of the group’s efforts during 2017.

On a cash flow basis, we spent $26,063 more than we took in, reducing our cash on hand from $76,003 at the start of the year to $49,939 at year end. Aside from the extraordinary items mentioned above, our primary ongoing expenses were for ongoing maintenance of the pond ($10,450) and for marketing, printing and mailing ($3,000), primarily involving expenses associated with FOGP’s annual meeting and with this newsletter. Together, these items made up roughly 95% of our ongoing operating expenses. Of the $23,000 in contributions we received in 2016, a record $12,000 came in conjunction with the annual meeting/cocktail party. Contributions raised by this event have tripled over the past three years. In addition, the cash surplus after expenses for the event exceeded $10,000 for the first time.

As we look ahead to 2017, we anticipate a transition year where most of FOGP’s efforts will be directed toward gaining approval for phase two of the watershed restoration, which will encompass the area just below the Goodwives River Bridge, where the Upper Pond flows into the Goodwives River. We do not anticipate any unusual expenses associated with the approval process. Assuming this assumption proves correct, 2017 should be a year of operating and cash flow surpluses for FOGP, enabling us to
refill our coffers ahead of the next phase of the restoration project

Of course, operating on such a shoestring budget would not be possible without the extraordinary efforts of our Chairman, John Lundeen, and our President, Lucia Zachowski, who volunteered thousands of hours in 2016 toward making phase one of the project a major success. We thank them for helping to make the Upper Pond Restoration a showcase for our town, as well as a prime example of what can be accomplished when public and private entities work together in genuine partnership

The Friends of Gorham’s Pond and the Darien Public Works Department worked side by side with Candide Contractors to complete this complicated restoration. The old failed dam had to be removed, a temporary concrete block roadway constructed, over 800 tons of sediment dredged and removed, a new dam constructed and a state of the art, DEEP-mandated fish ladder installed. Kudos and many thanks to all involved. 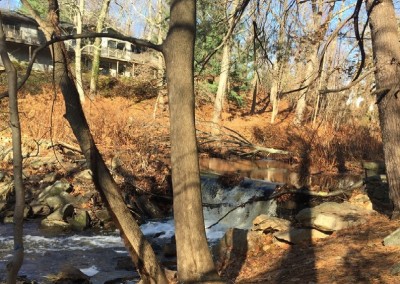 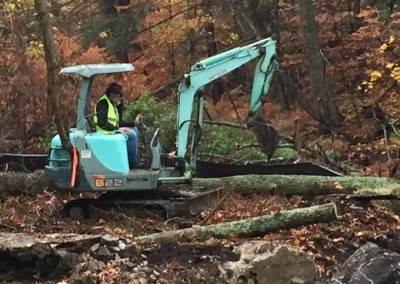 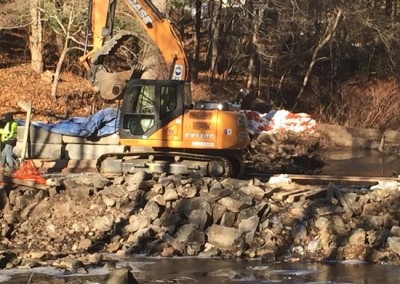 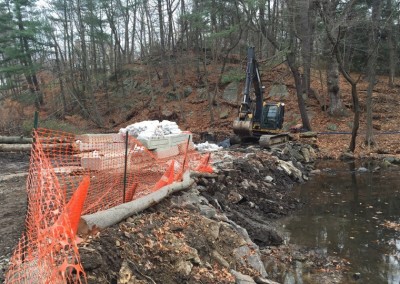 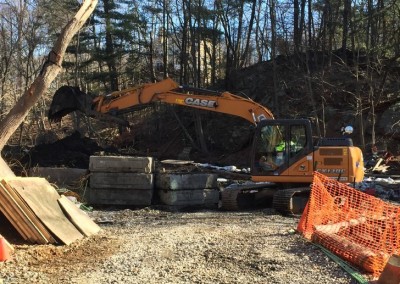 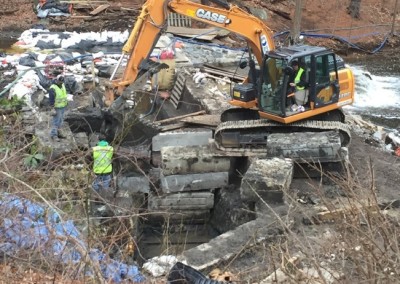 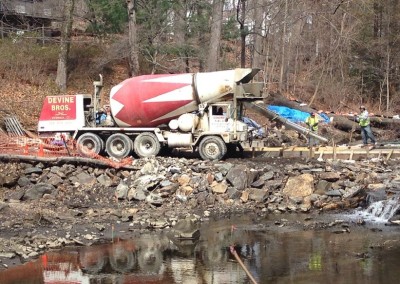 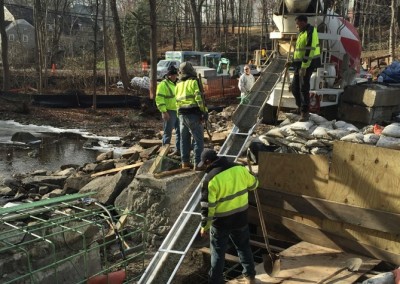 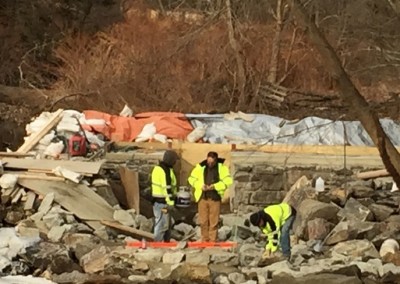 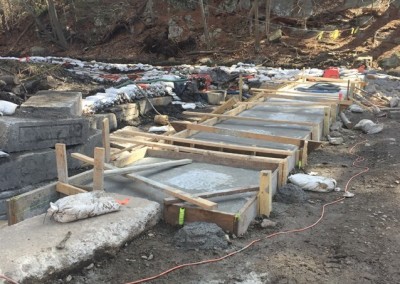 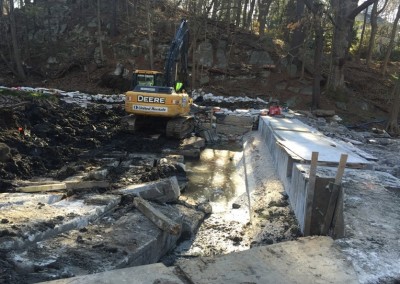 “Biologists and engineers from the States, U.S. Fish & Wildlife Service, NOAA, the licensees and their consultants and even folks from some conservation groups are very much engaged in the (improvements to fish passage) effort right now. In the summer of 2016, the Town of Darien built the Upper Pond Fishway on the Goodwives River in Darien (see photo below, right). This is the second dam on the stream. The first one (Rings End Dam) also has a fishway built by the Town. This project was part of a project to rebuild the dam and dredge the pond. The pond is maintained as a sediment trap to minimize sediment entering Gorham’s Pond. The fishway is a steeppass and targets alewives. This extends the run another half mile upstream to the next dam. An eel pass was also installed on the spillway of the dam. This project was part of a long-term effort by the Town to rehabilitate streams and ponds that flow into the Goodwives River. We appreciate the work the Town has been doing and including fish passage in their plans and the continued coordination by Darren Oustafine, Assistant Director of Public Works. “